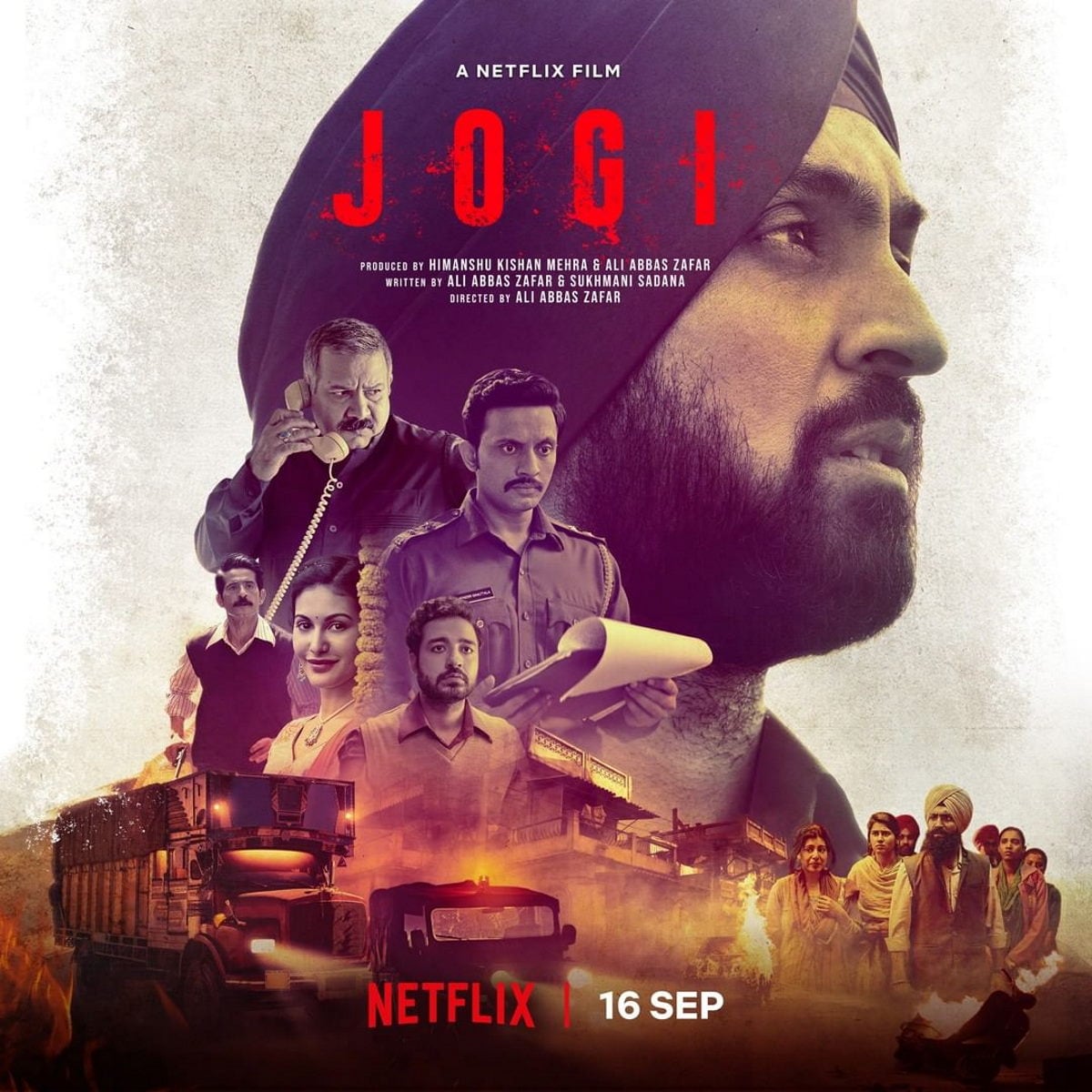 Jogi — out Friday on Netflix — is a fictionalised biopic of sorts, recounting the horrors of the 1984 anti-Sikh riots in Delhi. Headlining this project is singer-actor Diljit Dosanjh, who guides us through a heart-thumping narrative, that sees him transition from a run-of-the-mill student to a prime target; solely based on some conspiracies tied to his faith. Interestingly, the actor had previously dabbled in a similar topic, via the feature film Punjab 1984, though it was mostly set in the aftermath of the said events.

It’s clear that Jogi serves as a passion project for Dosanjh, who marks his digital streaming debut with Netflix. Under Ali Abbas Zafar’s direction, the film will explore a fictionalised tale of three friends — different religions — who orchestrate the biggest human heist, escorting friends and family all the way from Delhi to Mohali, Punjab, in cramped trucks. For the uninitiated, the 1984 anti-Sikh riots in Delhi were set off due to former Prime Minister Indira Gandhi’s assassination by her Sikh bodyguards. This upset the locals, igniting a nationwide massacre, with around 2,800 dead Sikhs in Delhi alone.

Needless to say, tackling a such a political subject requires a sensitive approach. Zafar’s last venture, Tandav — now streaming on Amazon Prime Video — stirred controversy, for allegedly depicting Hindu gods in a manner hurtful to religious sentiments. With Jogi, the filmmaker has taken measures to present the story in an authentic manner, stating that his team did not have any censorship guidelines for Tandav.

Jogi is presented as a well-mannered college student, who looks after his family
Photo Credit: Netflix

“With Jogi, a lot of things have changed. As creators, we have to understand that we have to be a little sensitive as to how we take a story in front of an audience today. This has been a learning experience for us. We don’t want anyone to get offended,” he said in an interview. “With Jogi, we have been very, very careful and I hope the audience only gives love to it.”

With that, here’s everything you need to know about Netflix’s Jogi.

Jogi releases on September 16 at 12:00am PT / 12:30pm IST exclusively on Netflix worldwide. It will require a subscription plan, starting at Rs. 149 for mobile and Rs. 199 for the basic plan, which lets you stream on a TV or laptop but only in SD resolution.

Udta Punjab-fame Dosanjh plays the titular Jogi, a well-mannered college student who cares and provides for his big family. The pleasantries are cut short when riots erupt in Delhi, causing them to separate and placing targets on their backs. When conjuring a plan to transport his people to a safe haven, Punjab, he even goes against his faith by cutting his hair to blend in with those hurting his people.

Joining him on the crusade is Rawinder Chautala, a low-ranking police officer, who has developed a bond with Jogi’s family. Played by Mohd. Zeeshan Ayyub (Article 15), the loyal friend comes up with the plan to escort hundreds of Sikhs, whilst using his connections as a cop to ensure safe transport, and in the process, beat up unsuspecting thugs.

As the city of Delhi erupts into flames, another key figure, Kaleem, rises to the occasion, guiding Jogi’s family through hordes of furious men, armed with torches. Played by Paresh Pahuja (Tandav), the trailer hints that he creates some of kind distraction, so the Sikhs taking refuge in the nearby Gurdwara can board the trucks without fear.

Kumud Mishra (Sooryavanshi) is billed fourth on the list as Tejpal, a corrupt politician, who acts purely on emotions. Upon hearing the news regarding Indira Gandhi’s death, he orders a tally of Sikh names from the voting list. Tejpal appears to have ignited the riots, by tasking a group of masked hooligans to set fire to all households and property that have a Punjabi nameplate attached to them.

Other notable inclusions are Amyra Dastur as Jogi’s love interest, Kammo, and Hiten Tejwani as Lali, an ally to Jogi and the other Sikhs. Information regarding the family is quite sparse, with all of them being treated as minor characters. Odd, given the Netflix trailer portrayed them as a key driving force of the story, with ample screen time.

Kumud Mishra as the corrupt politician Tejpal in a still from Jogi
Photo Credit: Netflix

Here’s the official synopsis for Jogi from Netflix:

Jogi unravels the story of a resilient friendship and courage in the times of adversity, set in Delhi in 1984. The film is a thrilling, emotional journey of the fighting spirit of three unified friends. It is headlined by Diljit Dosanjh, Kumud Mishra, Mohd. Zeeshan Ayyub, Hiten Tejwani and Amyra Dastur, directed by Ali Abbas Zafar and produced by Himanshu Kishan Mehra and Ali Abbas Zafar.

Netflix unveiled the trailer for Jogi on August 30, highlighting the pleasant family dynamics and budding romance, that was put to rest, once the riots began. It went into detail, showing brief glimpses of the torture and discrimination, Sikh individuals had to endure — even forcing Jogi to discard his turban. Luckily, the trailer ends on somewhat of a bitter-sweet note, we see our hero pummeling down on the politician who kickstarted the affair, and ultimately, marching to his homeland, Punjab.

There’s no word on when the first reviews are expected. Going by earlier Netflix Indian originals, reviews are usually embargoed until the time of release.

Here’s the official poster for Jogi from Netflix: