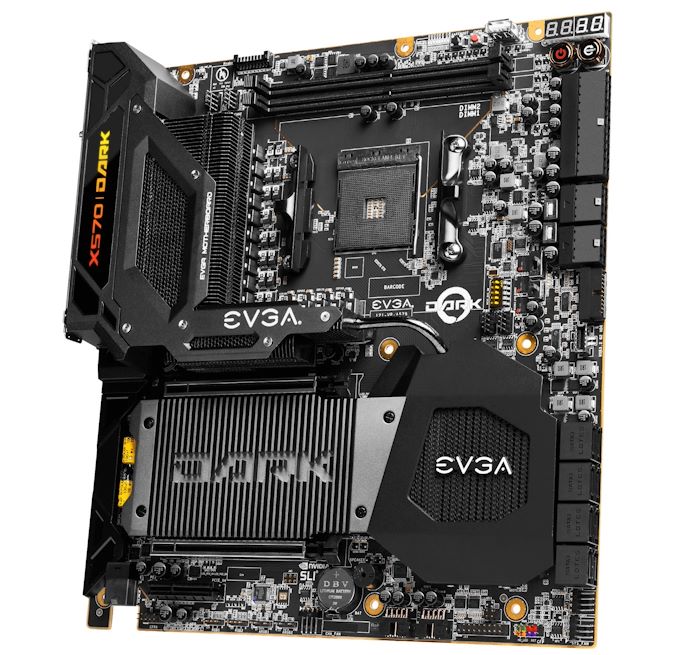 Here’s the latest update to our list of recommended AMD motherboards in our series of motherboard buyers guides. All numbers in the text are updated to reflect pricing at the time of writing.

Regardless of whether you’re looking to build a new system or upgrade an older one, AMD has a wide range of processors to cover all use cases. Its AM4 platform has been a highly successful one for AMD, giving us the likes of Ryzen 1000 (Zen), Ryzen 2000 (Zen+), and even Ryzen 3000 (Zen 2) and Ryzen 5000 (Zen 3). It’s no secret that AMD is soon to unleash its next generation of Ryzen 7000 (Zen 4) processors in the coming months, but right now, AMD still has a strong hand with its X570 and B550 motherboards to support its Ryzen 5000 series.

If you’re looking to build an AMD-based desktop system, there’s plenty of choice including the original X570 chipset, as well as the refreshed X570S models with passive chipset heatsinks, not forgetting the premium but affordable B550 range. In our latest buyers guide, we’re offering our recommendations on AM4 motherboards for users looking to capitalize on Ryzen 5000 now from a variety of different perspectives, including what’s good in terms of value, all the way to the best money can buy.

Looking for our best Intel motherboard choices? Head on over to our Intel Motherboard Buyers Guide instead!

Our recommendations for motherboards are based entirely on my personal and professional opinion.

For our August 2022 picks, we’ve considered updated pricing as well as availability in the US. Some of these models are slightly adjusting in stock levels and price, so we’ve adjusted our guide to accommodate this. It’s also worth noting that B550 is generally considered the budget AM4 platform, but competitively it often has the more attractive pricing when compared to X570.

Another element is that many vendors have released new ‘X570S’ motherboards onto the market last year, with new features and passively cooled chipsets. These new models have been factored into the decision, but the benefits versus B550 in some cases don’t always equate to better value, which is ultimately considered in ALL but our ‘money no object’ pick.

For users looking for other options, we’ve also gone over multiple chipset families as well in the links below.

For our pick that represents what we think is the best sweet spot for gamers taking into account things like features, compatibility, and pricing, we’ve opted to go for a mid-ranged B550 model from MSI. The MSI MPG B550 Gaming Edge WIFI sits just below its premium B550 Gaming Carbon WIFI board but comes with a range of features such as 2.5 GbE, WI-Fi 6, and a decent Realtek ALC1200 HD audio codec. 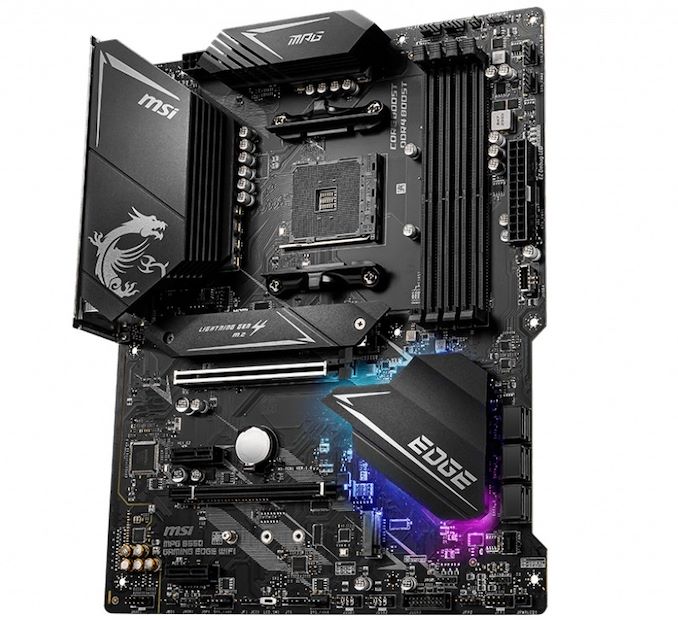 Looking at what makes the B550 Gaming Edge WIFI our pick for August, it has a simplistic black aesthetic with silver accents on the heatsinks, with integrated RGB LEDs within the chipset heatsink. There’s plenty of PCIe expansion support with one full-length PCIe 4.0 x16 slot, a full-length PCIe 3.0 x4 slot, and two PCIe 3.0 x1 slots. For storage, the B550 Gaming Edge WIFI includes two M.2 slots with the top slot operating at PCIe 4.0 x4, and the second slot limited to PCIe 3.0 x4, while six SATA ports are present which support RAID 0, 1, and 10 arrays. MSI includes support for fast DDR4-5100 memory and allows users to install up to 128 GB of system memory across four memory slots.

The MSI MPG B550 Gaming Edge Wifi has an MSRP of $200 and represents its more mid-range AM4 series aimed at gamers. At present, Newegg is selling this model for $199, while it’s also at Amazon for $199. MSI has included some premium components including a Realtek RTL8125B 2.5 GbE Ethernet controller, with an Intel AX200 Wi-Fi 6 CNVi offering decent wireless networking compatibility, as well as support for BT 5.0 devices. Overall the MSI MPG B550 Gaming Edge WIFI has plenty of features to satisfy gamers, it features overclocking support with Ryzen 5000/3000 processors, and brings enough to the table to make it a solid option for gamers looking for a viable option for a new gaming system.

In previous guides, the value options have mostly been B450 models, due to B550 being more expensive, and sometimes a bit too much for true ‘value.’ However, the B450 range seems to be reducing in stock, causing prices to increase. So we’ve chosen the B550 Phantom Gaming 4/AC, which represents ASRock’s entry-level gaming series as well as PCIe 4.0. 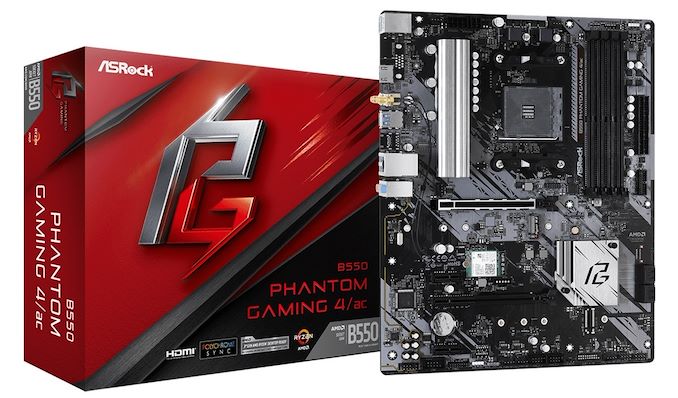 Even though it is one of the cheapest B550 boards, ASRock’s B550 Phantom Gaming 4/AC offers a competitive entry-level feature set. The board comes with a PCIe 4.0 x4 M.2 slot and augments that with four SATA ports, which is plenty of capacity for game storage. The top full-length PCIe 4.0 slot operates at x16, while the bottom slot is locked to PCIe 3.0 x4, which is controlled by the chipset, along with two additional PCIe 3.0 x1 slots. For networking it is using a standard Realtek based Gigabit Ethernet controller, along with an Intel Wi-Fi 5 interface. This is pretty standard for an entry-level model that focuses more on overall support than adding extra cost at the expense of premium controllers. The B550 Phantom Gaming 4/AC is also using a Realtek ALC1200 HD audio codec but with just three 3.5 mm audio jacks on the rear panel and a basic 8-phase power delivery.

The ASRock B550 Phantom Gaming 4/AC is currently available for an amazing price at Newegg for $95 which is the lowest we’ve seen this model.  Amazon also stocks this model, but it’s more expensive at a cost of $112, so we recommend users purchase this model at Newegg. At $95, this price makes it one of the best-value AM4 models currently on the market in terms of features, specification, and price. Looking at the bigger picture, most of the PG4/AC’s competition comes from the cheaper selection of A520 boards with the majority of these based on the smaller micro-ATX form factor, with limited expansion options. Meanwhile, the biggest competition from the X570 product stack is arguably ASRock’s own X570 Phantom Gaming 4S model, which is currently available at Newegg for $140. This offers better future-proofing and eight SATA ports, but it also includes only a single M.2 slot and doesn’t have any wireless capabilities, so the B550 version gets our vote on price alone.

There are an impressive array of Mini-ITX AMD boards to choose from. Our pick for the best mini-ITX motherboard at present remains unchanged, and that is GIGABYTE B550I Aorus Pro AX. The Aorus Pro AX represents a solid premium offering, with official PCIe 4.0 support, two M.2 slots, a Realtek 2.5 G Ethernet controller, and an Intel Wi-Fi 6 interface, all at a solid price point.

You can read our full review here:

The GIGABYTE B550I Aorus Pro AX has four perpendicular SATA ports, one PCIe 4.0 x4 M.2 slot, and an additional PCIe 3.0 x4 M.2 slot with a full-length PCIe 4.0 x16 slot. In terms of power, the GIGABYTE B550I Aorus Pro AX has a direct 8-phase power delivery with eight premium Intersil ISL99390 90 A power stages and is controlled by an ISL229004 PWM controller. This is impressive not only for a mini-ITX motherboard but one designed for the ‘budget’ B550 chipset.

Focusing on connectivity, this board has dual HDMI 2.0 outputs as well as DisplayPort 1.4, a single Realtek RTL8125BG 2.5 GbE controlled Ethernet port, and an Intel AX200 Wi-Fi 6 interface. There are also plenty of USB ports to make use of, with one USB 3.2 G2 Type-C, one USB 3.2 G2 Type-A, and four USB 3.2 G1 Type-A ports, as well as a handily located Q-Flash firmware update button. In an upgrade to supported memory for B550, the B550I Aorus Pro AX also supports up to DDR4-5300 memory.

The GIGABYTE B550I Aorus Pro AX has an MSRP of $200 and Newegg has it for $200 currently, while Amazon has it for the same price at $200. Although the pricing on this model fluctuates week by week, we consider this board to represent good value for money between the $190 and $225 price mark, with stern competition from ASRock’s $200 premium B550 ITX board or ASUS’s also-$200 B550 mini-ITX offering. Out of all of the AM4 mini-ITX models on the market, some X570 models include Thunderbolt 3 – notably the ASRock X570 Phantom Gaming-ITX/TB3 – but it does cost more with an MSRP of $240. Overall the GIGABYTE B550I Aorus Pro AX is our top mini-ITX pick out of all the AMD AM4 models when taking quality, feature set, and pricing into consideration.

Money Is No Object

When it comes to my money no object pick from all of AMD’s available motherboards, I’ve typically gone for flagships with oodles of features. Despite the distinct lack of ‘value’ in these selections, I’ve opted for a slightly different approach this time and gone for what I believe is the best performance X570 motherboard available at retail, and that’s one of the latest, the EVGA X570 Dark. Not only did we recently review this board, but it completely exceeded our expectations in performance.

So what makes the EVGA X570 Dark so special? Well as we saw in our review, it breathes new life into the AMD Ryzen 5000 and X570 platform. Not only is it EVGA’s first AMD-based motherboard for a very long time, but it did it in style with one of the most well-equipped models designed for pure performance. Touching on performance, it’s very heavily geared up to extreme overclocking, with a transposed AM4 socket, an impressive overclocking toolkit, and a large 17-phase power delivery operating at 14+2+1.

You can read our full review here:

Memory support is interesting as EVGA is using just two slots which some users may find odd on an E-ATX sized motherboard. This is to enhance memory overclocking potential and performance, with shorter traces to the CPU socket for a theoretical reduction in latencies. The EVGA X570 Dark supports DDR4-4800 out of the box, with a combined capacity of up to 64 GB; more than most users will need for any desktop system.

Other features for everyone to benefit from includes dual Intel I225-V 2.5 GbE controllers and an Intel AX200 Wi-Fi 6 CNVi, which offers both wireless and BT 5.2 connectivity. The board also has plenty of support for PCIe 4.0 devices with two full-length PCIe 4.0 slots operating at x16 and x8/x8, with a half-length PCIe 4.0 x4 slot. Storage options include two PCIe 4.0 x4 M.2 slots, with eight SATA ports, six of which support AMD RAID 0, 1, and 10 arrays. Onboard audio is also premium with a Realtek ALC1220 HD audio codec doing the hard work, with an EVGA NU SV3H615 headphone amplifier adding an extra element of quality to a user’s auditory experience.

The EVGA X570 Dark is available direct from EVGA’s website for $690, but it can be had at both Amazon and Newegg for cheaper which is great considering the performance of the board in our test suite, as well as all of that untapped potential available via overclocking. The X570 Dark managed to push our testbed Ryzen 7 3700X processor to 4.4 GHz all-cores, which is the only AM4 model we’ve reviewed that’s managed to achieve this fairly comfortably.

One thing about this model is stock levels fluctuate on a weekly basis, and for users looking to create a Ryzen 5000 or 3000 series system with a focus on maximum performance, the EVGA X570 Dark is the best in its class. It’s even available at the best price we’ve seen it on offer at Amazon for $550 and Newegg for $550, so if you’re lucky enough to see one in stock and have the cash handy (as it is at the time of writing), grab it, as EVGA doesn’t typically mass-produce its models as other vendors do. 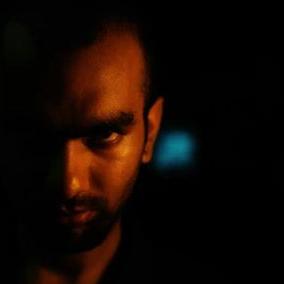 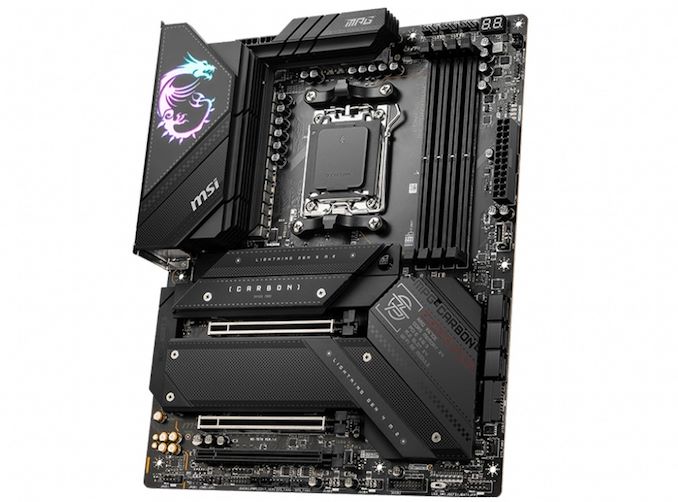