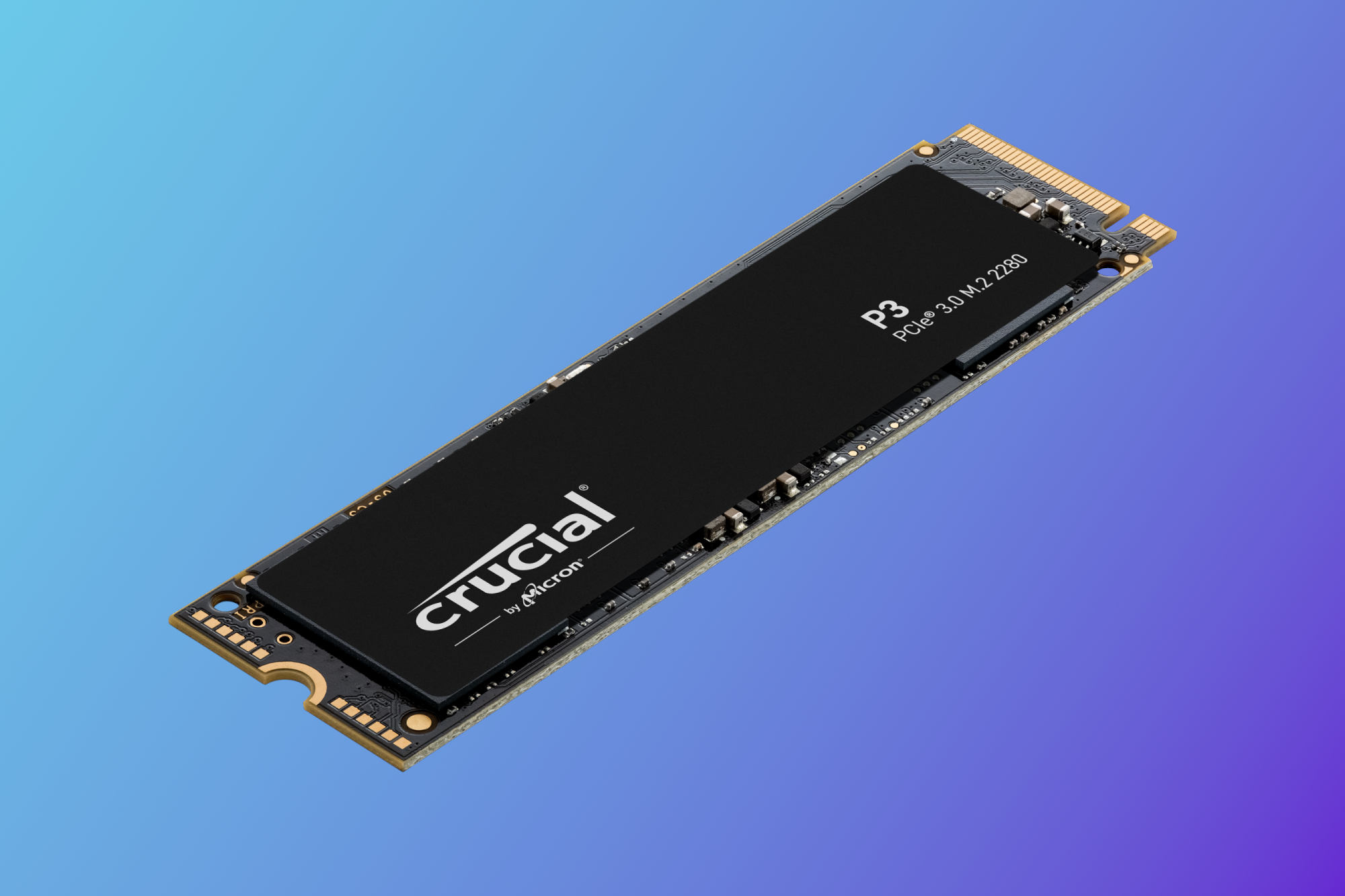 If you’re looking for lots of capacity without robbing a mint, then the Crucial’s P3 fills the bill. The PCIe 3 performance is very good if you don’t continually write large amounts of data, though the TBW rating is parsimonious at best.

If you’re looking for the most SSD capacity for the least amount of money, you’re talking Crucial’s P3. It’s a decent PCIe 3 NVMe performer, which means it’s very fast in the overall storage pantheon, but its chief charm is 4TB for $350. Yup, less than 10 cents a gigabyte.

This review is part of our ongoing roundup of the best SSDs. Go there for information on competing products and how we tested them.

There’s nothing unusual about the P3’s design. It’s PCIe 3.0 x4, uses HMB (Host Memory Buffer, aka your system’s RAM) for primary caching, and sports a Phison E21T controller and 176-layer Micron QLC (Quad-Level Cell/4-bit) NAND—almost identical to its Crucial P3 Plus cousin with the exception of PCIe 4 support.

And, while the plain P3 isn’t as fast in synthetic benchmarks, it delivers just about the same real world performance as the Plus. Subjectively, you’d likely never notice the difference between the two.

The small fly in the P3 ointment, however, is Crucial limiting the drive’s five-year warranty with some extremely low TBW ratings: 110TBW on the 500GB, 220TBW for the 1TB, 440TBW for the 2TB, and 800TBW for the 4TB flavor. Those are less than half what you’ll get with most bargain drives.

Of course, given everything we know about SSD longevity, it’s extremely likely that the P3 will will last far beyond the TBW ratings. Crucial just doesn’t guarantee it.

The Crucial P3 is a very good moderate-use performer given that it uses the older PCIe 3 interface. In fact, the drive is as fast in benchmarks as many past champions from the pre-4th gen era. Alas, the P3 is the only PCIe 3 SSD we’ve tested on our new test bed, so we can only compare it in print to PCIe 4 types.

However, I can that that the PC’s CrystalDiskMark 8 results are well above average for SSDs tested on our old PCIe 3 test bed.

Yes, the Crucial P3 got its toukus spanked in CrystalDiskMark 8 by the fantastic SK Hynix P41. That’s to be expected given that its rival runs PCIe 4 and has DRAM primary cache. If you want the best random performance (shown below), which makes a difference when you’re running your operating system off of it, get an SSD with DRAM onboard.

Below is the throughput for all the CrystalDiskMark 8 tests totaled together. Not an incredibly scientific metric, but certainly indicative of overall performance.

As you can see above, overall, the P3 is not fast for an NVMe drive. However, that’s like saying the entry-level Tesla S is slower than the three-motor Plaid variant. It’s still very fast in the overall scheme of things. Where you can see the differences start to disappear is in real world sustained sequential transfers, like our 48GB small and large file tests shown below.

In what might appear to be a shocking development, the P3 actually set a new single-drive record for our 450GB single file write. However, this test is designed largely to see when a drive runs out of cache. And the 4TB P3 tested here is not going to run out for a while.

The other drives we’ve tested have been “only” 2TB in capacity. They still had plenty of cache, but likely had to do more thinking about when to write the TLC as SLC, where the 4TB P3 knew it had plenty more QLC. However…

…if you exhaust said secondary cache, as we did on the third 450GB write without a break, you will see a drop in write speed to less than 100MBps. QLC can be very, very slow when written natively (as 4-bit, 16 voltage level) due to all the error-checking involved. This is not a drive you want to pound on continuously, and not suitable for heavy-duty video use.

Each test is performed on a newly formatted and TRIM’d drive so the results are optimal. Over time, as a drive fills up, performance will decrease due to less NAND for caching and other factors. The performance numbers shown apply only to the drive of the capacity tested. SSD performance can vary by capacity due to more or fewer chips to shotgun reads/writes across and the amount of NAND available for secondary caching.

If capacity is your major criteria, the Crucial P3 delivers it cheaper than anything other NVMe SSD we know of. And the performance is still very, very NVMe-like until you write a whole lot of data to it at once. We do, however, wish that the TBW ratings didn’t invoke a feeling of rolling the dice on our investment.